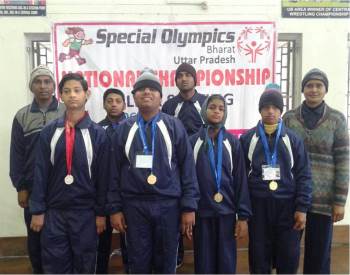 Monika Bagadi is 10 year old girl with the problems of mental retardation with speech problems, poor attention and very poor academic performance, residing at village- Makadwali, Block Shree Nagar, District Ajmer with her parents. Her father is a labor and mother is house wife. She belongs to BPL (Below Poverty Line) family. Her birth was short term, low birth weight and after birth due to short term delivery she had been admitted in nursery for 15 days. First she got admission in a normal school Pragya School, Makadwali. But there she was not comfortable and did not improve herself. So her school teacher suggested her parents to send her in a special school where the facilities will be available like speech therapy, physiotherapy, Special Educator and special attention on intellectual challenged child. Then parents took initiative to find special school, they came in contact with facilitator of Room to read programme run by RMKM at Makadwali school, through him they contacted at Minu Manovikas Mandir Inclusive School run by the Rajasthan Mahila Kalyan Mandal, in village Chachiyawas, Ajmer, They told him that only one such type of school in Ajmer, which is the best for their daughter. They came to the Chachiyawas RMKM Campus and had seen all the facilities providing by the Organization. They satisfied and admitted her daughter Monika Bagadi in Minu Manovikas Mandir Inclusive School on 29.08.2011

Before admission our professional experts have done the assessment and found that she was intellectually challenged girl and had a speech problems (pronunciations/ languages problems) and others problems like very poor academic performance, low attention, wiping her neck, beating other children, frequently clapping etc. After got the assessment result she had admitted in inclusive LKG class of Minu Manovikas Mandir Inclusive School. she referred to the speech teacher and special educator.

After regular intervention of speech therapy and also assessment done by our professional experts they found that her vocabulary has now much more increases in comparison to previously. Now she is trying to sing Bal Geet with expressions, Now she improving her writing skills, recognition/identification of numerical numbers from 1 to 60, identification of Hindi words (Vowels and Consonants)development in verbal communication, motor skills and doing colors in worksheet independently, recognition of shape, size and numbers and participated in conversation. She reduced her hyper activity. She had also participated in cultural activities, games like, Race and skating. Her confidence level has improved a lot and she had participated in Divisional Level games and also participated in National Championship of roller skating from 6 to 11 January 2014 held at Bareilly (UP) and won Gold Medal in Zigzag & Silver Medal in Straight Roller Skating. Her village Sarpanch and other villager went to receive her at Railway Station and warmly welcome her. Village sarpanch stated “I never believe that a girl from our village won gold medal in roller skating at National Level I really proud of her.” This was the remarkable achievement for the school as well as spreading the effective awareness that mentally challenged students could perform better if we could provide opportunity to the disabled people in the community for the betterment of the special child. Her Father said I am very happy and not explain my happiness in words and feel that I am top of the world. This was possible due to Inclusive Education. By seeing Monika’s improvement they admitted two younger nondisabled brothers of Monika in our school.