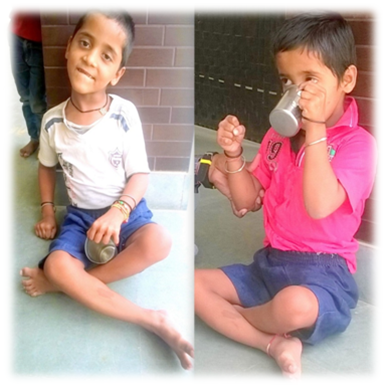 Rohit, a 6 years old boy having Cerebral Palsy, he was born on 29 July, 2010. He is a resident of Kayad Village, Block- Shree Nagar, and District- Ajmer with his parents, three elder sisters and one younger brother. His Father is a Labor, mother is a house wife & sisters are studying in Government School. He belongs to a middle class family. He was born through Caesarian in 8 months because of which he was weak & under weight. Family had no idea of what they have to face, as Rohit started growing up his family observed that there is something different about him but they had no clear idea about it. They took him many places thinking that there is some black magic on him due to which he is not able sit & speak but they ended up with no result. Luckily CBR worker met the Anganwadi Worker of Kayad Village so through them Rohit’s Family was contacted. They were explained about what their son is facing & how he can be helped, they were ready to cooperate. On 21 May, 2014 his assessment was done by the Professional of Rajasthan Mahila Kalyan Mandal. During the assessment it was observed that Rohit is completely Bed Ridden, not able to speak, he was also facing problems in gripping things but there was something +ve about him i.e. he was not afraid of new people who come to meet him. A big smile on his face can be seen always as he doesn’t care about what people think about him. He is here to make everything beautiful around him through his smile like a lotus which is surrounded by mud & muck but still it blossoms. So as per the assessment he was found appropriate for care group, for his family it was like a ray of hope which is shown by Rajasthan Mahila Kalyan Mandal. This hope can be seen in the eyes of his Family. His mother was always there whenever CBR Worker visits him. It’s been 3 years now since CBR programme is being given to him & a nice change can be noticed in him. He has started sitting by the support of a pillar or a wall, there is improvement in his grip as he drinks water by himself through glass. There is a lot of improvement in his speech, and he clearly takes name of his family members. He tries to communicate to people by himself who come to him by giving them smile or by pointing out towards them. Rohit’s family is happy with his progress & hopes for more…..